I love a classic ‘stars aligned’ moment, when everything falls perfectly in place and life leads you toward something amazing. I can think of a handful of these moments in my life, and love reflecting on how the failure of my intended plans resulted in incredible events and experiences I hadn’t even imagined. And, as I found out on Sunday, sometimes the cosmos have something even more spectacular in mind: in my case, perfectly aligning the sun and the moon with my geographic coordinates.

When fellow CCAers Cathy and Lisa heard I might be moved to Kampala while sorting out the visa debacle, they informed me of the upcoming solar eclipse. I have never seen an eclipse and hadn’t heard anything about the event, but was happy to tag along for the ride. 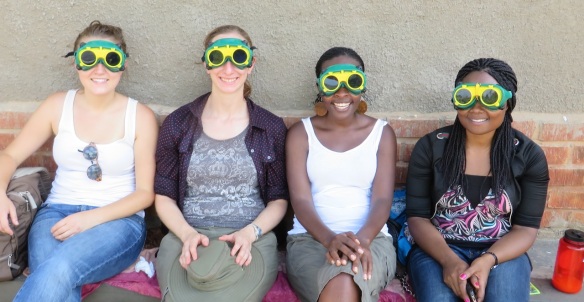 On Saturday, Cathy worked out the details and determined it would be about $45 CAD per person to hire a private taxi for the return trip to Pakwach, a small town in Northern Uganda. Cathy had thought the trip to be about 3 hours each way. I thought the price was rather steep and hesitated on whether I wanted to participate. After a few minutes of debating, I thought, “When in Uganda … !” and decided at very least, it would be exciting to be part of the hullabaloo.

The journey was a lot farther than we initially thought – 6 hours and 400some kms on roads ranging from freshly paved to pothole central to dusty and desolate dirt road. Along the way, I got my first glimpse of the Mighty Nile – the longest river in the world, which flows from Uganda’s Lake Victoria and weaves her way 6,853 kms North to the shores of Egypt’s Mediterranean Sea.

A large part of the trek to Pakwach travels through Murchison Falls National Park, the largest park in Uganda, and home to big game such as elephants, lions, and giraffes. Lisa and Cathy have both seen various wildlife while traveling through the park, but due to the high traffic on Sunday, only a handful of monkeys could be spotted sitting on fence posts, curiously watching the unusual procession Northward.

We arrived in Pakwach around 1pm and stopped for lunch at a local restaurant. On the menu: beans, posho, and matooke – a traditional, stick-to-your ribs kind of meal that ran less than $2 CAD for heaping portions. The town was buzzing with activity. Newspapers reported in advance that Uganda expected over 30,000 tourists, scientists, and eclipse hunters to descend on the country, most congregating in the tiny, off-the-beaten-track town in Northern Uganda.

While a partial eclipse could be seen around the world, Pakwach was deemed to be the best of the few places to view the total eclipse. When an eclipse can be seen both partially and fully, it’s called a hybrid eclipse. Less than 5% of eclipses are hybrid with last occurring in 1466 and the next expected in 2114.

The fanfare surrounding the event was incredible. About 10 kilometers outside of Pakwach, on a dusty dirt road that has surely never seen such traffic, thousands assembled for the spectacle. Vendors were selling ‘Eclipse T-shirts,’ Ugandan-style street meat (goat brochettes and dried fish), and an assortment of local arts and crafts. At one point, the presidential motorcade whizzed by, Ugandan flags flapping in the wind atop armoured vehicles. I caught a quick glimpse of President Museveni in his signature brimmed hat as his entourage whipped up a frenzy of dust and excitement.

I am always in awe of the resourcefulness of people in developing countries. When you don’t have the luxury of throwing out your old [insert noun here] or buying a new [insert noun here] for that one time you need it, creativity and inventiveness are second nature.  From x-ray paper to black plastic bags to burnt CDs to home-made pinhole cameras, Ugandans were ready and eager for the once-in-a-lifetime event.

I was prepared for what I thought the eclipse was going to be: moon crosses over sun, everything goes dark for a short time, light reappears, the end. I fully expected the fanfare to be the highlight of my day. And until 5:21pm, the crowd excitement definitely made the $45 taxi fare worthwhile. And then, the effect of the full eclipse hit and completely blew me away.

In the minutes leading up, the sun was increasingly sliver-like. If you looked to the sky with the naked eye it appeared to be normal sunshine; a filter was necessary to distinguish the moon’s shadow against the sun’s incredibly powerful rays. It was interesting, but frankly, nothing to write home about. When viewed through welding goggles we had picked up in Kampala, it resembled a waning moon. At 5:21, the moon fully covered the sun and, looking through the welding goggles, I could no longer see anything. Expecting it to be dark, I took off the goggles and looked to the sky.

In what can only be described as a pure moment of magic, the sun burst from behind the moon creating a perfect ring of brilliant violet, blue, and white rays. The effect was mesmerizing; a surreal display of light and fire unlike anything I have ever seen or imagined. As with everything truly spectacular, this moment of jaw dropping beauty deceived the laws of time. Like the stretch and release of an elastic band, seconds slowed to an eternity and then charged forward at breakneck speed. Truly transfixed, the crowd let out a communal gasp and erupted in cheers.

Image via http://xjubier.free.fr/site_stickers/solar_corona_shape/1970_03_07.jpg – similar to what could be seen in Pakwach

I might have seen the corona with my naked eye for some 10 seconds. The whole breathtaking spectacle lasted 23 seconds in total, and had I not been fumbling for my camera for some of that, I probably would have been stunned into blindness. The crowd’s excitement was palpable; smiles stretched from ear to ear as people looked to their friends to confirm that the incredible display wasn’t just a figment of our wildest dreams. And to top my expectations for the third time that day, I turned around to see a rainbow on the opposite horizon. Best. Eclipse. Ever.

Jostled out of Rwanda, I came to Uganda a bit defeated, depressed, and unsure of what lay ahead. Whatever it is, I feel truly lucky and I couldn’t be happier about the timing… Uganda has totally eclipsed my heart.

“I may not have gone where I intended to go, but I think I have ended up where I needed to be.” – Douglas Adams

Check out photos from eclipse-fest 2013 on my flickr page.

Photo from the Pakwach eclipse via http://www.newvision.co.ug/news/649081-thousands-view-total-solar-eclipse-in-pakwach.html

5 thoughts on “total eclipse of my heart”