Two years ago I was out for my first solo-attempt of the incomparable Stein Valley Traverse and nothing was going as planned. 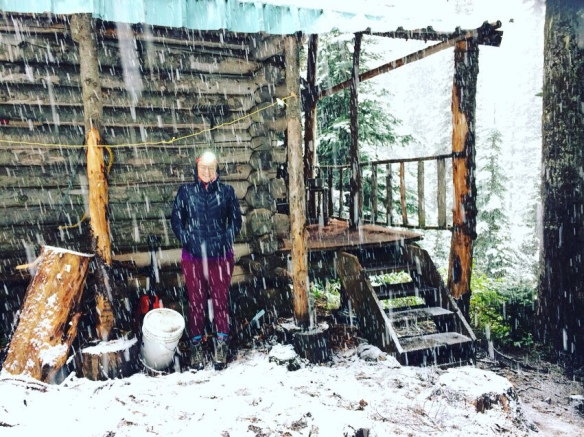 My start date was delayed a month by forest fires, and by the time I set out in September, the notoriously volatile weather through the Stein Valley was not working in my favour. Rain, fog, and a heap of snow kept me from moving forward. The route requires a great deal of bushwhacking and mountaineering, and without being able to see the footpath beneath the snow and mountain features obscured by the fog, I was forced to wait out the weather. I had carved out 9 days which gave me a good buffer, but with each day of poor weather, this trail I had been drooling over and talking about for months was slipping away.

It was depressing. I was alone on top of a mountain waiting out the weather, questioning my decisions and feeling like a bit of a failure. When a group of 4 came along and the weather seemed like it might clear, I asked them to send a message to my trip plan contacts saying I’d be a day late.

The next day, even though the weather was a bit better, I didn’t feel right. Something was off. I stayed in bed longer than I should have and let my Stein dream slip away, and spent the next day beating myself up for it. Eventually, I came down the mountain but felt compelled to make the five hour drive around to the other side, to the Asking Rock at the east end of the traverse, and camp a night there. Meanwhile, I continued to feel physically off and mentally low.

On the other side, I met up with the Asking Rock. I had been thinking for months about what I would ask the rock; I had built it up in my mind as a reward for my efforts and tried to narrow down a succinct and all-powerful question. I felt silly for driving out to the east end, meeting up with the Asking Rock without having completed the traverse, but something compelled me. I decided I’d make the drive, hike in, and camp the night.

When I got to the trail head, I wasn’t in good shape. I felt like an idiot. I didn’t know how I was going to tell people I hadn’t followed through with this trip I had been working up to for months. I hadn’t updated my trip plan holders on my whereabouts because the whole plan seemed stupid. I was down on myself and couldn’t bring myself to start out.

I delayed. I went to the confluence of the Stein and Fraser rivers instead. I delayed some more. I criticized myself. I felt something nagging in my stomach. And yet, something compelled me here, against logic and the self-critical tantrum in my head.

Eventually, I returned to the trailhead and brought myself to suit up. When I reached the Asking Rock, still unsure of what great gift I would ask for, I surprised myself with how quickly it came to me: I asked for safe passage and peace for my friends and family. That simple.

Walking on, my spirits began to lift, as they often do when I’m out for a walk. When I rounded a bend and saw someone stopped in the middle of a single track boulder crossing, I tried to slow my pace so as not to run into an awkward shuffle. It was too late; the person standing there in worn out runners, holding an empty basket, had seen me.

As I approached, they turned to me and said with an ear to ear smile, “Hi, I’m Johnny!” extending an open hand. As I shook it, Johnny continued, “I’m going to fill my basket with the spirits of my ancestors, would you like to join?”

I accepted the offer, and trailed behind as Johnny weaved through trees and rocks, pointing out medicinal plants, barks used to weave baskets, and the birthing rock, where their ancestors had been born since time immemorial. I hardly spoke, didn’t once mention what I was doing there, but Johnny talked the whole way, saying things like “nature heals us,” “the air, the forest around us, all this is medicine,” and “we don’t need to be afraid of nature; the more you come back to this place the more at home you will feel.” Johnny read my mind, said everything I needed to hear.

Along the way, I learned that Johnny had just lost someone dear, someone young. I got the impression it was a suicide, got the message that the youth are hurting, understood that too many of us are too disconnected with nature, with culture, with traditions.

The Stein Valley is a sacred place, a cathedral. Johnny was filling their empty basket with the spirits of their ancestors to help them through this loss. When we reached the sacred Rock Painting wall, we parted ways, my basket likewise full.

I spent the rest of the day reflecting on this chance encounter, understanding that this is what had compelled me eastward. The pain I had felt in my stomach subsided some as I slept under the stars that night.

In the morning, I headed back to the city, eager to connect with my best friend and share this story, but not yet ready or willing to tell the greater world that I hadn’t completed the traverse. Something in me still questioned if I had been weak for not forging on, had been weak for feeling physically off.

No sooner did I reach the city when something went really really wrong. The pain I had been feeling for the last few days intensified. By the time I dropped of the rental vehicle, it was all I could do to make it to the public bathroom and lay on the cold tiles. Eventually, I pulled myself together and got a cab home, took a few Tylenol, had a snack, and tried to rest. I have a very high pain tolerance and I’d spent the last year reeling from two parasites and doctors who for months told me my symptoms were psychosomatic — in my head — while my body and mental health deteriorated. I told myself I was just peckish for having waited so long to eat and wasn’t keen to make yet another trip to a doctor if I wasn’t on death’s doorstep.

Before the night was out, I was in fact on death’s doorstep. My appendix had ruptured and by the next morning I was on the operating table. 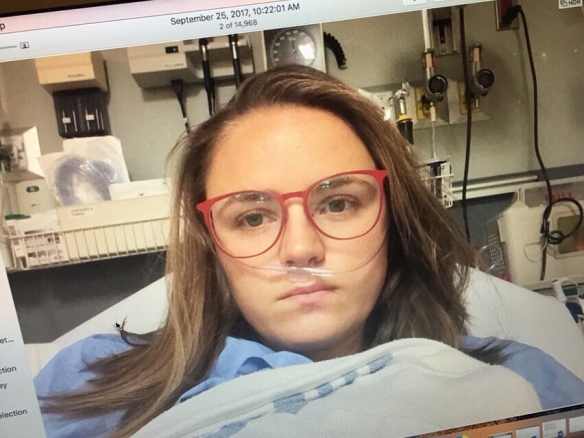 Here’s what I’ve taken from that experience: Now, I listen to the universe. The universe definitely didn’t want me to go on that hike. The awful weather kept me stationary on a mountain peak long enough to make the traverse timeline pretty impractical, if not impossible. I also learned to listen to my body. I felt off, but told myself to pull up my socks, told myself, as doctors had done to me, that the pain and bodily resistance was in my head, or at least was surmountable via my head. If I had carried on when the weather did clear a bit, I would have been on an isolated trail by myself when my appendix did rupture, which would almost certainly have meant death. Through the larger experience — the months and months of struggle with doctors — I learned to listen to others, too. I learned to trust that people know their own bodies and brains, as I did mine. I learned to hold my own judgements and opinions and “helpful suggestions” when people I love are going through physical and mental pain. I also learned to listen to my intuition, to lean in when I feel compelled and trust the delays when something seems to be holding me back. Something said go east. Something in me delayed setting out for hours. If I hadn’t gone, if I hadn’t delayed, I wouldn’t have met Johnny. I wouldn’t have discovered the simplicity of wanting peace for my friends and family. I wouldn’t have received the safe passage back to the city in time for my appendix to give out in the safe vicinity of medical facilities. All of these things — listening to myself, my intuition, my body, and the universe — are my safety nets as I walk across the country now, and prove to be invaluable time and time again. I’m so grateful for these lessons.

The next time I set out to tackle the Stein — the successful time — I switched my direction: I started with the Asking Rock, started with peace for my friends and family, and received safe passage and peace of my own.

3 thoughts on “intuition + the universe”